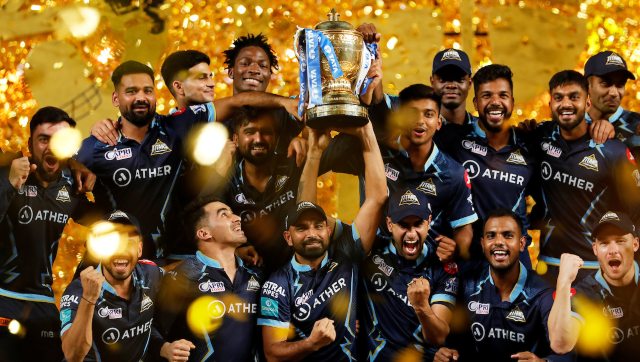 Gujarat will undoubtedly never forget this incredible year that marked their first IPL title triumph in what appears to be a fairytale season. They have defied all odds by coming in as underdogs and pulling off a massive upset to secure this incredible triumph.

The 2022 IPL final at the Narendra Modi Stadium was a highly anticipated match between the underdog Gujarat and the Rajasthan Royals. The final match was marked by the attendance of several on and off-field football personalities. The closing ceremony featured Ravi Shastri, AR Rahman, and Ranveer Singh, who put up a spectacle befitting of a tournament final.

Towards the finals, Gujarat made a change to their starting lineup, bringing in Ferguson to replace Alzari Joseph. However, the Royals did not make any changes to their starting eleven. In the end, the Gujarat Titans, a new team with a first-time entry, ended up clinching the IPL title in their inaugural year, with a seven-wicket win over their opponent. It is an undeniable fact that they put up a very spectacular performance. It is also worthy of note that this is the third time they have managed to beat the Royals in the competition. Jos Buttler, the Rajasthan Royals star player, finished the tournament as the tournament’s top scorer.